Many people get confused that Loveladies is not really a town but a section of Long Beach Township.  It is located on the northern end of the island in between Harvey Cedars & Barnegat Light.

In 1871, the area became the location of a US Life Saving station and became known as Station #114.  It was decided that a new name should be given to the area. There was a small island in the bay located adjacent to the station that was owned by a Waretown resident, Thomas Lovelady.  The area was renamed Lovelady’s, which eventually evolved to the name Loveladies.

In 1962 most of the homes were destroyed from a catastrophic storm.  It gave an opportunity for residents & architects to build an array of unique homes.  Loveladies is now known for its modern & innovative homes;  many homes have been featured on house tours, magazines, and newspaper articles.  It is a residential area with the exception of the cultural LBI icon, the LBI Foundation of Arts & Sciences. 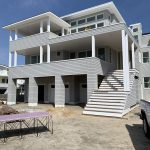